Centralized deconfliction is done before the take-off. The UAV operations are (pre-)planned in the way such that, as long as drones follow their , at any moment of time the distance between any pair of drones will be greater than the minimum allowed, meeting robust separation criteria and eliminating the need to invoke UAVs onboard equipment.

As input to the deconfliction algorithm we have the operations demand (origin–destination pairs and intended departure time) for some time horizon T. The output are drones’ flight plans. A flight plan is a plan for the 4-dimensional trajectory (4DT) of the drone, i.e., a specification of its xyz coordinates for each time t.

In our implementation of centralized deconfliction, a flight plan is a polygonal path in a fixed layer (no layer changes on route). It is assumed that the vehicle always fly at their nominal (maximum operating speed) speed unless it is restricted by the geovectoring or turning speed restriction (ground speed is further affected by the wind Thus, the 4D trajectory for the drone is defined as soon as the time when the drone starts following the flightpath is specified. VTOL segments are added at the endpoints of the flight plan at the origin and the destination.

The Hybrid concept assumes that preventing conflicts is better than resolving conflicts. Therefore, the first two components, namely the airspace structure and the centralized pre-flight strategic separation management components aim to prevent as many conflicts as possible by ensuring that drone flight plans are largely conflict-free. But because of uncertainties such as wind, conflicts may still occur during flight execution. The decentralized in-flight tactical separation management component addresses such conflicts.

The decentralised concept seeks to allow individual agents as much freedom as possible in order to accommodate the massive numbers of predicted urban air traffic. The consequence is that the separation responsibility lies with the individual agent. The decentralised concept will, however, also have a central authority to provide information (such as traffic) and flow constraints (implemented using geovector limits) for airspace areas. This central authority can be seen as a combination of centrally imposed dynamic road traffic speed limits and traffic information provided by Google Maps: it tries to prevent further congestion by imposing geovector limits in dense areas, and also provides traffic information to other drones for path finding purposes. The different components considered within the decentralised concept are presented in the following figure. 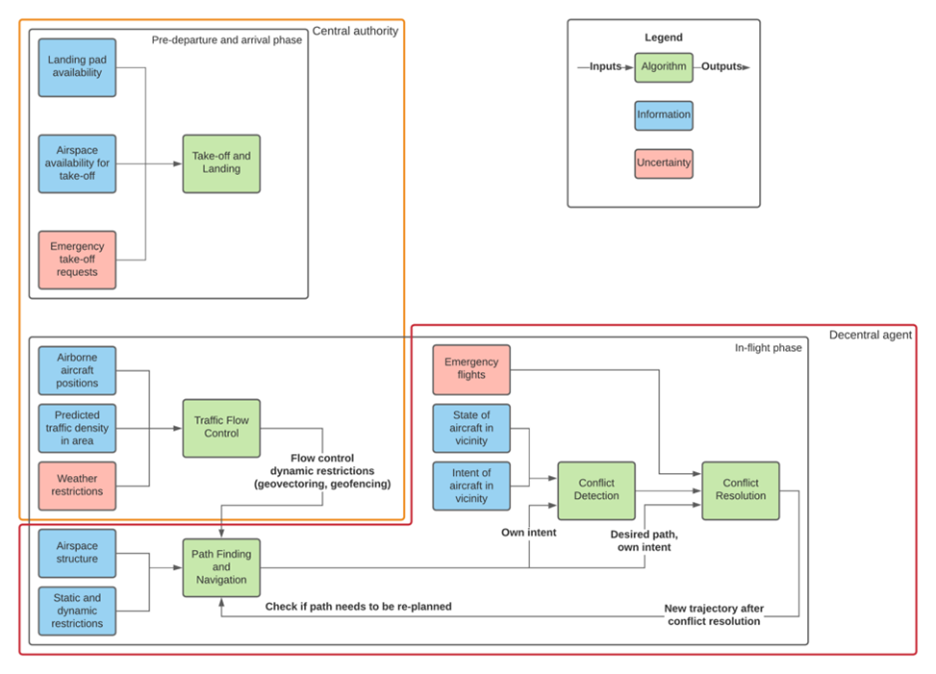 This project has received funding from the SESAR Joint Undertaking under the European Union’s Horizon 2020 research and innovation programme under grant agreement No 892928.